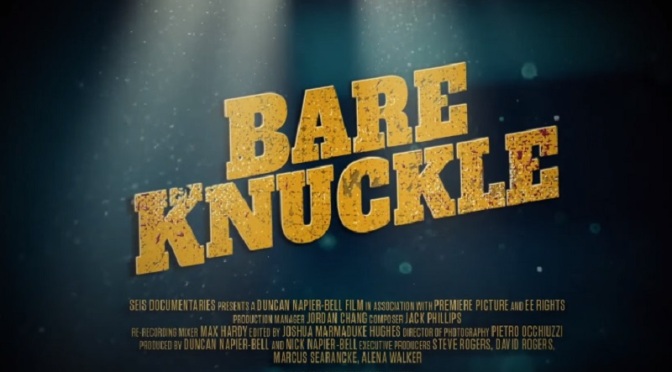 Bare Knuckle fighting, possibly the oldest form of one on one combat, has always struggled with its seedy history and gruesome reputation, but with the rise of UFC and it’s contaversional and multi talented fighters, Director Duncan Napier-Bell casts an insightful eye to the roots of combat, but without detailing at historical icons, he instead looks at the current bare knuckle fighting scene as it emerges from it’s gloomy backstreet habitat and reveals a bold attempt at adapting for a bigger and brighter future.

With testimonials from big faces such as Frank Bruno and some mediocre UFC fighters, there’s a lot of professional views on just how hardcore Bare Knuckle fighting really is. Not that there was ever a doubt, just how bloody and violent the sport is? But stepping away from the Irish Travellers style of fighting in a field for family honour, the push to get bare knuckles into the ring as a contender to boxing and MMA, but for some reason it just doesn’t seem to make any ground. Maybe due to the damaging effects and risk to health and safety?

With candid interviews from fighters, and some behind the scenes into prepping for a fight and the fight itself, you’ll get a full picture of where the world of Bare Knuckle fighters is in the modern world. It’s not as glamorous and profitable as the other fighting industries but it’s always been the underbelly of the combat world but finally it’s on the cusp of becoming something of a contender but only for those who are truly mad enough or brave enough to step into the ring for utter carnage and potential brain damage.

Having such a dodgy track record of being associated with traveller feuds and 18th centre back street london adventures it’s a vibrant change of pace to see that this game is now more established. It looks cool in the MMA promos, the UFC like to promote how Kimbo Slice came up from the streets, of how fighters worked their way up from the street to prove they are game bred but to choose this a career and to stay in what’s perceived as the underdog games, you’re gonna be made from different stock entirely.