Unlike a lot of action films that are based on comic characters. Phillips takes a totally different stance on recreating his solemn and realistic Joker in a studious drama focused on a downtrodden clown on the verge of his magnum opus. Last year we had a solemn Suspiria (2018) and now we have a courtly Super Villain, not just because everyone really loved Suicide Squad (2016) but a handful of grown ups wanted something more tangible and .. grown up!?

Generally the origin of the Joker is common knowledge, it’s been revisited many time in various graphic novels and comic series of the the years, but this is the first of a new series of DC comic remakes based in a more plausible world, and this chilling story for Arthur Fleck is outstanding, not only for the new birth of the worlds most favourite bad guy but it stands as a benchmark of Joaquin Phoenix as a truly versatile actor whose masterful adoption of characters that purposely don’t gel with audiences, only make them more lovable. It’s pretty easy to see this as the DC version of You Were Never Really Here (2017) but maybe in reverse but it’s just a tad darker and outlandish with crazier people involved. But in all honesty I wouldn’t want to blend the two films as they stand alone in their own glorious and unforgettable rights. END_OF_DOCUMENT_TOKEN_TO_BE_REPLACED

Sometimes I read the synopsis of a film and then check the time and can’t fathom how someone can drag out something so simple for so long, reading about Gerald’s Game, a woman trapped along chained to a bed, the mind doth boggle how i can last for nearly two hours, but this movie is amazing in the details and revelations that incur during Jessie’s surprise and accidental incarceration.

Jessie (Gugino) and her husband Gerald (Greenwood) travel to a remote beach house to rekindle their marriage, with a bit of kink, after running into a stray dog, Jessie puts some food out for the dog incase it’s still in the area and notices that a door has been left open. Focusing on the fun she slips into a something more comfortable and Gerald pops two viagra, handcuffs his wife to the bed and dies from a heart attack. END_OF_DOCUMENT_TOKEN_TO_BE_REPLACED 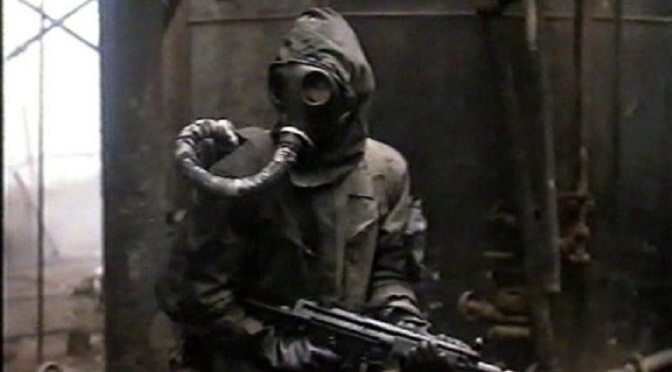 There is always an element of Love and Hate with this Anime/Live Action mashup, the film will captured my affection many year ago and I still enjoy watching it, while blindingly unaware of it’s origins I just assumed two directors got together to produce this mix of post apocalyptic drama/ baroque mystery, many years later I realised how this project basically butt fucked a precious classic Anime movie and turned it into a Troma movie BUT I still adore it.

So the original Anime is  Mamoru Oshii’s 1985 undefinable classic Angel’s Egg, which sees a young girl traverse an abandoned town while nursing a giant egg and entertaining a young soldier, the film dissolves into a biblical darkness that even the director himself can’t really explain. But Carl Colpaert decided to rehash the strong imagery in between new footage filmed in the hot Australian desert and brings new life and meaning to the bizarre original. END_OF_DOCUMENT_TOKEN_TO_BE_REPLACED

It’s taken me a long time to watch this as I have such a deep connection with the original film, for me Robocop is a saint and I was almost insulted that anyone would dare to remake the movie, but this is a very loose remake that pretty much relies on you having seen the original too get make sense of some of the benial content. But don’t take my low rating as a sign that I am a total fangirl of the Verhoeven classic, I have taken a lot of energy to think outside of my little box.

In this rendition of the tragic life of Alex Murphy (Kinnaman), he’s a brilliant righteous cop who is on a questionable case that keeps giving him and his partner Lewis (Williams) the slip. END_OF_DOCUMENT_TOKEN_TO_BE_REPLACED

It’s not often I waltz into a remake but I thought I had better make an tiny effort for this one.. the film manages to stay true to the original but in all the wrong ways, heavily inspired by the cult classic banned movie from 1978 This remake of I spit on your grave managed to recreate a harrowing rape and revenge experience. Highlight rape culture and male dominance in society the film is a stark warning to the extent of the darker recesses of human culture. END_OF_DOCUMENT_TOKEN_TO_BE_REPLACED

When I first heard about this film I was shaking my head crying about Another remake, but I still headed out to see it, just because I wanted to have a sofa to myself at the new local Empire Cinema,so I booked those two seats baby!

So it’s not a remake but it is a remake, yet again we’re discovering Kong but he’s not King anymore, in the same was that Spider man is not just a spider man he’s the AMAZING Spiderman, so now that King Kong had been downgraded and a slightly different persona and his tastes for blondes has been abandoned.
END_OF_DOCUMENT_TOKEN_TO_BE_REPLACED

Long ago in a not so mega city a wee girl used to spend most of her pocket money  on her comic addiction.. 2000AD used to be the regular poison of choice, and maybe a few things by Dark Horse on special occasions.. The weekly dedication soon turned into two and three magazines a week and specials for Christmas and birthdays at at the height of this the comic boosted that fans were finally going to get a movie! the intensity of this new chapter of comics was a big matter, fan art and letters features in specials, speculations hung alongside with wishes and dreams of the Mega cities coming alive with our most amazing (anti)hero. I was too young to see the film but I saw it anyway, hell it was the Odeon, everyone goes in there under aged.. it’s part of its charm.. as for the film it was a bit of a charmless adventure. END_OF_DOCUMENT_TOKEN_TO_BE_REPLACED

I was totally reluctant to see this and it did take a couple of years for me to finally give in as it was on Film4 and generally they don’t fuck around with shit films.. generally.. The movie was never going to be as good as the comics, and very few comic remakes are that good, and on top of this Mr Keanu (I’m a wooden puppet) Reeves is cast as the lead and I stepped back crying OH HELL NO, until i realised Tilda Swinton had a small part and decided it would be worth it to perve on her.

Hellblazer.. *ahem* I mean John Constantine is like a detective/guardian who deals with all things religiously supernatural, demonic possession, angels and demons who try to interfere a little too much etc etc, with the help of his ambitious sidekick he’s onto something big here that leads him almost straight into hell and to Devil himself. After rescuing a young girl from a demon a little secret is let out, and John is on the case of trying to stop one of the devils sons from coming back to burn this earth and claim it for his own. Dect Angela Dodson  (Rachel Weisz) has recently lost her twin sister to suicide and through messages left behind and Constantine’s help the pair are in for a wild ride as they try to decipher the mysteries of Hell’s army. END_OF_DOCUMENT_TOKEN_TO_BE_REPLACED

Paul Rudd and Michael Douglas to star in Ant-man! Biochemist Hank Pym obtains the ability to communicate and control insects!! Director Edgar Wright and producer Joe Cornish are aiming to roll this one out next July.

Edgar is well known for Shawn of the dead (2004), Hot fuzz (2007) and World’s end (2013) etc, all films I’ll never bother watching… Joe had a level of success with Attack the block (2011) but I don’t think I’ll be rushing out to see this one but I think it will do well, with a level of comedy,  big names, being another hero movie and out around the summer holidays it’s gonna do ok!

I can’t think of many clichés I’d expect to see..to be brutally honest I would like the movie to be like the Tick I’m live action, oh wait that’s been done… This one is hard to.predict as I’ve not read the comics, I’m just thankful Simon Smeg isn’t in it… Yet!

I’ll await to see what unfolds! Then probably avoid it 😦

A young priest is ordered to preside over the wake of witch in a small old wooden church of a remote village. This means spending three nights alone with the corpse with only his faith to protect him

I wasn’t quite sure what to expect from this movie, initially I used to think Russian/Ukraine movies were all a little lo budget and crappy.. Alas I grew up and started watching more movies, realised that what I had seen in the past were critically acclaimed movies and not the stranger stuff that I appreciate and low and behold every country suddenly has an underground current of movies that entertain me… sorry I’m loosing myself here.. Viy (1967) is a lush vibrant gothic horror story. T: It’s based on a book by Nikolai Gogol.

You can read a summary here on the wiki (http://en.wikipedia.org/wiki/Viy_(story)) and the artist Natalie Shau did a gorgeous photo manipulation that you can see here (http://www.ihlet.com/blog/fine-digital-art) The story had captured many other artists over the years and there is no wonder why, the story is very visual and fascinating. END_OF_DOCUMENT_TOKEN_TO_BE_REPLACED