After the raging success of  Yojimbo, Akira Kurosawa, adapted Hibi Heian,  to incorporate the lead character and developed Sanjuro. A sort of pseudo sequel,  while carrying on all of the comedy antics from Yojimbo, this film only has one classic full on Samurai scene and it’s very end,   but it’s generally entertaining throughout, if only a little off key from the original.

A group of young Samurai,  gather together the temple to discuss the Lord Chamberlain who they believe is corrupt,  one of them tells the superintendent and he agrees to intervene and meet the secretly at the Shrine to discuss the problem.  A Ronin (Mifune)  emerges from another room where he’s been resting,  overhearing the Summarise discussing their plan, he suggests that it’s the Chamberlain who is  corrupted, they feel insulted by his claims but soon find themselves surrounded by the superintendent men proving that in fact the Ronin was correct. He persuades the men to hide while he goes out at face the  superintendent Men full on, in this altercation he manages to save the young gullible Samurai, a manager’s to win rust on both sides. END_OF_DOCUMENT_TOKEN_TO_BE_REPLACED

A cult classic that still influences a host of modern directors, this independent horror film manages to create a bizarre ghostly atmosphere that has been difficult to re-create since.

A few girls are out for a lark, when then encounter some greasers who challenge them to a drag race over a bridge, the girls car crashes in the river and they get pulled along by the rapids, the rescue mission fails to find anything but a shabby and bemused young blonde bombshell emerges from the water the only survivor from this tragic misadventure. Mary’s life is never quite the same after the accident. The church organist relocates to Utah, where she finds herself set apart from the locals and stalked by a strange pasty faced ghoulish man (Harvey) as she’s drawn towards a mysterious carnival on the outskirts of town near the river,  where she’s inclined to dance. END_OF_DOCUMENT_TOKEN_TO_BE_REPLACED

END_OF_DOCUMENT_TOKEN_TO_BE_REPLACED 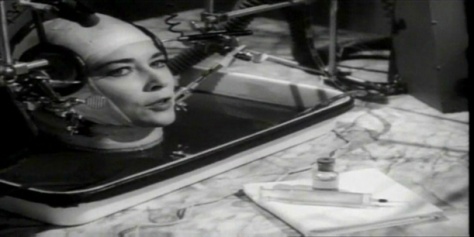 One of the more experimental and exploitive sci fi films from the 50s? I’m not getting my dates wrong, the film was made and completed in 1959 under the working title of   The Black Door  but was not released until 1962!? A brilliant scientist manages to find a way to keep the brain alive outside of the body, then after a tragic car accident his girlfriend is tragically injured but he manages to save her head, unlike the other brain he’s been keeping alive his girlfriend’s head had the ability to look around, talk and experience new psychic abilities that are the side effects of the chemicals that are keeping her alive. While her beloved travels around trying to find her a perfect body, she starts connecting psychically with a “thing” kept in the laboratory with her, but her only source of reasoning comes from the deformed lab assistant, a sort of retro Igor. END_OF_DOCUMENT_TOKEN_TO_BE_REPLACED