Franco’s attempt to build a provocative romp around African magic, works in as much as it combines a staggering round of art house prono with a loose story about a powerful witch princess who’s attempt to take over the world one orgasm at a time is going to plan.

END_OF_DOCUMENT_TOKEN_TO_BE_REPLACED

This gritty coming of age movie, set in a juvenile detention centre was an epic leap of faith, with several of the main characters having their debut in what is seen as a breakthrough piece. After his directorial debut Halloween II (1981) he got stuck into 4 episodes of Darkroom then onto this game changer,launching the career of Sean Penn and Clancy Brown among others.

END_OF_DOCUMENT_TOKEN_TO_BE_REPLACED

James Woods takes centre stage as Max, as the CEO of a small UHF television station specialising in sensationalist programming he’s constantly displeased with his current line up which is mostly soft core, while looking  for ways to boost the station, he stumbles on a bizarre broadcast featuring extreme violence and torture which he believes is staged and wants the show known as Videodrome for his station as he perceives it as something that everyone wants to see. While searching for the source of the broadcast, he employs his cameraman Harlan,  to record the shows for him, eventually he deduces that the show is being transmitted from Malaysia, and soon Max orders that Harlan to broadcast the show unlicensed via his network. The more Max watches Videodrome the more he begins to hallucinates the world around him, mechanical items become soft and fluid, pulsating with life and breathing, but this is only the beginning. END_OF_DOCUMENT_TOKEN_TO_BE_REPLACED

I’ve never really been swept off my feet by Bond movies, although I did get sweaty palms over some of the wonderful toys and gadgets. But the actual bond character changed with every incarnation and while everyone brought their own twist I couldn’t really find him all that believable. In contrast we have Rambo (stay with me here) Rambo is the toughest man alive (no question about it) a tough hombre who little kids wanted to be when they were all growed up, but then I discovered Riki-O (1991) a amazing invincible tough guy who makes Rambo look like a pussy.  In the same vein Golgo 13 makes Bond looks equally pussified. He’s an assassin who is always one step ahead of the game, women falling over themselves willing to die just for one night with him, no shot if ever off and he’s like teflon in hand to hand combat. There really isn’t anyone better than Golgo 13.

With that mighty introduction, what else is left to say? You now have the opportunity to see the toughest man alive do bossanova things.. Get going.

END_OF_DOCUMENT_TOKEN_TO_BE_REPLACED

I am constantly looking for films about serial killers that aren’t total let downs and after years of searching it seems I missed the boat as one of the greatest and more accurately disturbing films was released when I was a toddler, but despite its age it really hasn’t lost any of it’s vivacity and manages to detail the gruesome slaughtering of one family by a repetitive mass murder Werner Kniesek.

END_OF_DOCUMENT_TOKEN_TO_BE_REPLACED The literal translation of the title is The House with the Dark Staircase which is a little bit more appropriate; at least for the opening scene. Initially cast as a mini-series the film was scraped by Italian TV moguls for being too violent, so re edited as a much shorter film.

Starting with a peculiar scene a groups of boys dare each other to go down some dark stairs (hence the name) eventually one of the boys is forced down into the darkness where he meets his grisly fate, from there Bava leisurely  sets the pace of a whodunit with some impressive jump scares. END_OF_DOCUMENT_TOKEN_TO_BE_REPLACED 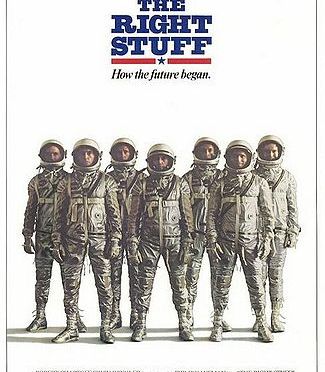 Synopsis : By flying higher and faster than any other man had ever dared before, Chuck Yeager set the pace for a new breed of hero. Those that had just one thing in common…THE RIGHT STUFF

Taking a golden slice out of 1950’s space race history, Right Stuff depicts a sentimental recollection of the transit from aircraft trials to the immense struggle for the USA to beat the Soviets into getting a man into space.

Films of this nature usually massage the patriotic heart and in all fairness this movie also manages to ease in a healthy level of humble pie, the triumphs are also mixed with downfalls, this isn’t just a easy ride to the top, for every step forwards there are sometimes two back. One thing that needs to be considered with this and all historical films is that everyone knows the ending. What has to be done and what the Right Stuff does well is that it gives the viewer a candid look inside the goings on. Dipping into the events and characters it successfully opens the door on a picturesque and fantastic document of team reliving the tribulations and achievements again.

Being a generous 3 hours the pace is stable throughout, the drama is enhanced by the macho bravado of the teams comedic attempts to out do each other through the physical trials and later on their camaraderie against the powers that be take the forefront as the men prepare themselves for the unknown.

Most of the hot shots are twinned with an equally loving and equal actress to support them, the “at home” scenes are incredible, the actors really work off each other, beautifully filmed both as a drama and with the flashy action scenes also, the custom score ads to the vitality of the dazzling sky adventures but the greatest aspect is the powerful acting. A lot of the big names in the 90’s and beyond were slotted together in this marathon movie.

While being slightly romantic it’s approach to the story is pretty authentic, it’s not something that wouldn’t go amiss in the classroom similar to Schindler’s List (1993).

TAGLINE : They were all drawn to the keep.

Nazis are forced to turn to a Jewish historian for help in battling the ancient demon they have inadvertently freed from it’s prison. At the Keep they will face EVIL.

A group of German soldiers in the Romanian mountains during WWII use an ancient stone fortress as their makeshift headquarters. The nazis are being eaten alive by an unseen force. Scott Glenn appears like a modern day superhero named Glaekon Trismegistus. Meanwhile a crippled professor (Ian McKlennen) and his daughter are brought in from a concentration camp to help the nazis who are also trying to raid the fortress to a Tangerine Dream OST.

The Monster is remarkable; I really admired the effects used to produce it, despite looking like a Marvel super villain it was hard to believe he was created when I was only 2 years old.

This movie is based on the Jewish legend of the Golem, but he’s been liberated from a creature fashioned of mud and stone into a creature that has forged itself from death and stone.

I felt that the film switched loyalty part was through, it seemed that we are herded to Scott Glenn as a saviour, where I was all for the Golem liberating the Jewish people in their time of need! I reckon it could have made a better story if the fall of the third reich was down to the Golem. Apart from that  I really enjoyed the film, it was quite original.
T : In the original novel by F. Paul Wilson, the Character Glasken calls himself Glenn, and in the movie he’s played by Scott Glenn.

Q : “A Devil? Now you listen to me, The devil in the Keep wears a black uniform , had a death’s head on his cap and calls him self sturmbannfuhrer.”