END_OF_DOCUMENT_TOKEN_TO_BE_REPLACED

Director: Carole Morley Starring: Zawe Ashton, Everyone else as themselves. UK/England. 1h 35m

What started off as a shocking headline, ending up depressing and confusing many who sparked up a conversation about the unknown woman involved. The woman was found dead in her apartment, having died 3 years earlier and had gone totally undetected for so long. The crime scene investigators turned up after bailiffs to a striking scene, with Christmas present covered in dust and the television still on, she had passed on her sofa.. but for 3 years went totally unmissed? It was always very concerning that someone would just fall between the cracks. Many couldn’t fathom how the utility or council hadn’t come for payment much earlier but what really got under the skin of the nation was that no friends or family had reported her missing or called on her in all that time.

END_OF_DOCUMENT_TOKEN_TO_BE_REPLACED

Somewhere in the bleak landscape built up by Roman Gavras in his disturbing and cringeworthy drama, two maladjusted men find a kidship and go on a spree of violent destruction around France. But what could link them so strongly on their crime spree, their red hair, it’s a plot which is just crazy enough to work but with Vincent Cassell not only starring but in place as a producer the film may not have achieved its full potential but it’s something so unusual and powerful, it sticks in the mind with it’s utter bizarre narrative and sly look at the social construct that would allow this to happen. END_OF_DOCUMENT_TOKEN_TO_BE_REPLACED 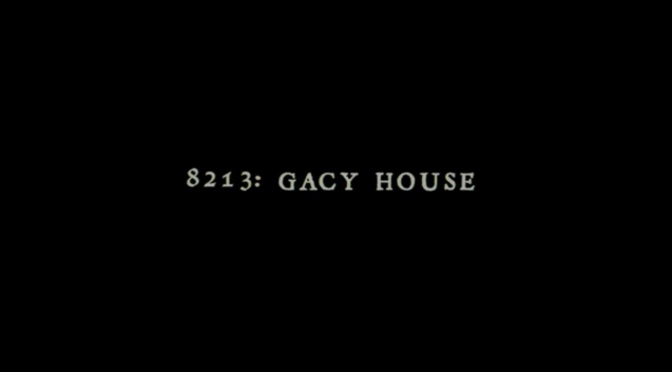 You have to love a bad setup for a found footage movie?! Not only has John Wayne Gacy’s house been demolished and rebuilt but as he was executed in a prison, shouldn’t his ghost be residing there and it would be the victims ghosts still in the house or the land where they were killed?

Without much fanfare the movie begins with the team arriving at the house to set their equipment up, a mass of cameras are placed in every room, and once they are pointing to where no action will be caught clearly the investigation really starts. It has a slightly different setup up to a lot of the other paranormal researcher inspired movies, most teams usually have quite a lot of enthusiasm but this one is is filled with scathing skeptics and some crazed hippy wiccan woman who believes some rhyming spells will be able to protect them from some kind of evil entity or poltergeist. In all my years of armchair occultist I’ve never known of anyone asking the goddess to help in some kind of seance before I’m sure there’s some eyebrows raised to offering a t shirt of a friends young son (what? why?) to the spirit of a serial killer!!? END_OF_DOCUMENT_TOKEN_TO_BE_REPLACED

Based on : the novel Nights in the Gardens of Spain by Witi Ihimaera.

Even though 80% of what I watch is considered “World Cinema” there are still areas which I find it hard to break into, and for some strange reason New Zealand is one of them, mostly because the only film anyone ever talks about is Once Were Warriors! Even I’ve been guilty of it, I’ve searched for the next fix, and I thought I had found it with The Last Saint, while a gritty drama it just didn’t pack the power of Once were Warriors, but I didn’t give up, New Zealand Cinema has a lot to offer and while this isn’t the very best, I found it to be a charming alternative albeit a little bit basic. END_OF_DOCUMENT_TOKEN_TO_BE_REPLACED

Long after a wave of brutal British films hit the screen in the late 70’s and early 80’s detailing social disturbances, punk and skinhead culture and a lot of lost souls, race relations were at a boiling point with the rise of right wing groups in English cities and this all got reflected in such institutional films as Scum (1979), Made in England (1982) and Scrubbers (1982), that era passed and there was a lot of calm, but director Kim Chapiron, who had blasted on the scene with Sheitan (2010) a creepy occult themed thriller starring Vincent Cassel. While Dog Pound doesn’t employ the macabre of the unknown it’s equally disturbing and a loose remake of Scum. END_OF_DOCUMENT_TOKEN_TO_BE_REPLACED

A mild mannered concierge with a big ole soft heart who single handedly runs a wayward hotel that doesn’t see much traffic due to a new road being built, meanders his life away,  the only random faces he sees are those who have old maps and ends up at the hotel by total accident but he accommodates them the best he can. END_OF_DOCUMENT_TOKEN_TO_BE_REPLACED

It’s not often I waltz into a remake but I thought I had better make an tiny effort for this one.. the film manages to stay true to the original but in all the wrong ways, heavily inspired by the cult classic banned movie from 1978 This remake of I spit on your grave managed to recreate a harrowing rape and revenge experience. Highlight rape culture and male dominance in society the film is a stark warning to the extent of the darker recesses of human culture. END_OF_DOCUMENT_TOKEN_TO_BE_REPLACED

The preview and adverts for this made it look like a cross between Se7en (1995) and WAz, dark and broody, crazy serial killer, but this dabbles with the atmosphere it’s really there’s more daddy daughter bonding going on and detracts from the “fun”.

The young and wonderful Fiona Wagner (Winnick) is studying for her masters degree in Journalism and is struggling to deal with her mother’s suicide, bonding with her father Tom Wagner (Pollak) )is hard as he’s busy busting crooks but a new serial killer starts to bring them together, chuck in the expertise of her therapist and they morph into a crime hunting trio. Sadly Fiona does a lot of the leg work. The killer is deranged and places people in tricky situations, one is a layer who’s killed by his teenage daughter, she has the choice of killing him or being killed along with her family. Another case is when a pianist is forced to choose between losing his fingers or hearing. END_OF_DOCUMENT_TOKEN_TO_BE_REPLACED

It had been quite a while since the release of Predator 2 (1990) which took the alien from the hot jungle into the equally hot city and after the failure of Alien vs Predator (2004) and it’s predecessor AVP requiem (2007) we were finally treated to a third installment of the Predator trilogy, And luckily it went old school and gave us some of the thrills that the original movie created and then in perfect homage to the original movie it mimics the original soundtrack but unfortunately fell short on bravado and instead opted for a slightly different less military, tough hombre approach.

Starting a movie in free fall  is slightly unusual but this is how Royce (Brody) is introduced into Predators, along with a few other tough guys and gal, from various war zones around the world and a strange doctor they find themselves being dropped into the jungle and are supposed to be the lucky ones as their shoots managed to work… They discover the corpses of the unlucky souls who had crashed straight into the jungle floor and some unknown cargo cases that held something which was obviously not human or pleasant, and possibly very hungry. After lots of tense suspicion and fights for the alpha male role the group eventually they band together to try and find a way out.Unfortunately for them, even their finely tuned skill and expert guerrilla, homicidal and military experience they could never be quite prepared what they have to face here on an alien game preserve. END_OF_DOCUMENT_TOKEN_TO_BE_REPLACED