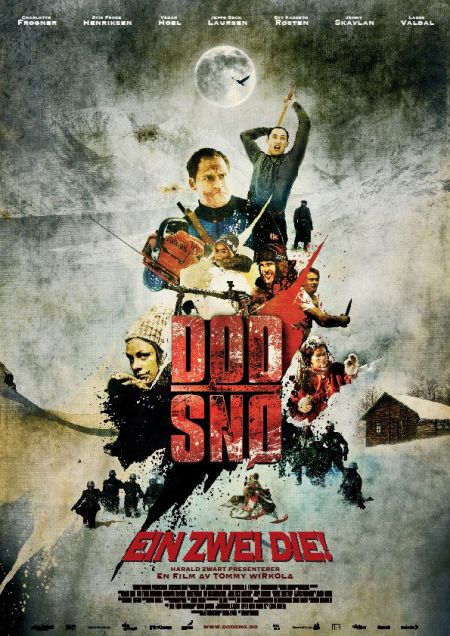 Sometimes a film will completely change a genre by being totally new and a super breath of fresh air and everyone loves it. Then there is Død Sno,  now i’m not saying it’s the opposite but it utilises everything that we’ve already seen but just makes it fucking awesome!!!

I’m not sure why it’s so perfect?! Maybe it takes a while after all the clichés have been played out to the nth degree that finally we can parody them?! Luckily it doesn’t become ridiculous like Scary Movie (2000) but there some very comical scenes in between the buckets of gore, metal soundtrack and some cute snowy Zombie’s.

Basically a group of teens go out to the middle of nowhere, find some cursed nazi gold and get stalked by horde of zombies but it’s unashamed and holds no punches whatsoever. The blood literally flows and  there is no fucking around, these kids are clued up and know what zombies are and what you may need to cut off to stay alive.

This is a fresh take on the aged and now somewhat boring genre, that was frayed into a tattered mess with a huge barrage of shitty zombie films to satisfy the Hollywood overlords. But instead of following the herd this runs off into the middle of the field butt naked and swinging glo sticks, screaming come and have some fun!! Not to be taken seriously this film is dangerously fun.