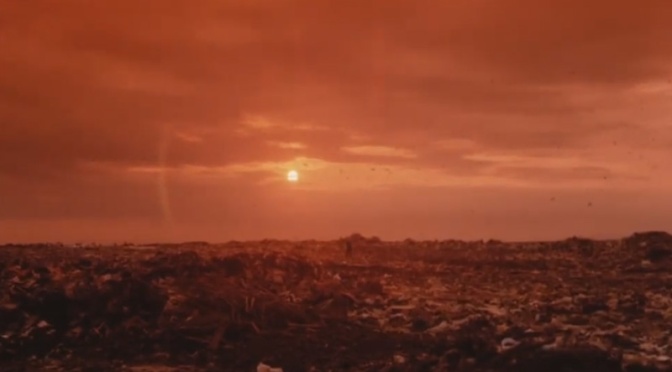 The jaw dropping, mind bending and highly disjointed follow on to Dead Man’s Letters (1986), shows that Lopushansky has lost none of this amazing vision of the world after an apocalyptic disaster. Usually history is written by the victors but who really comes out on top when the entire planet sinks into a nuclear winter?

From it’s dark crimson opening, it’s clear that the world is a very different place in this complicated post-apocalyptic future, that carries on from living memories of Chernobyl. The world attempts to keep things moving as a tourist attempts to traverse the barren landscape to visit a museum buried deep below the ocean. Clothed in a long black coat and carrying a single suitcase he stumbles through massive piles of waste, fights through clouds of dangerous dust and catches the saddest looking train I’ve ever seen limp down a track. Eventually he makes it to his “hotel” a house run by rich elites that looks out onto a vibrant shore that leads to a hidden fabled Museum.

END_OF_DOCUMENT_TOKEN_TO_BE_REPLACED

After the impressive Waxworks(1988) Anthony Hickox spoilt his loyal fans with a sequel only 4 years after the original, possible in an era when fans were honoured with such things rather than waiting a lifetime for nothing. It’s very typical for Hickox’s trademark horror lightly dusted with black comedy, evil henchmen drenched in black with lots of hints of magic and a bizarre array of special effects and fantasy.

The final scene of Waxworks has been re-enacted and the film flows on seamlessly from here. Although it’s a little scattered and less formed than the original where we saw a group of wayward teens visit an enchanted waxworks exhibition and its freakish staff. They one by one get seduced into a display and find themselves thrust into the fantasy world that it depicted. While this is rife in this comedic sequel, it has a very different atmosphere to it, nothing is really taken seriously here, and after all we’ve seen it all before with the original and it seems that Hickox was just out for a lark with this one. He does make the most of the original set up, so the film is presented in different segments each with a very unique feel and theme. END_OF_DOCUMENT_TOKEN_TO_BE_REPLACED