This is easily one of my all time favourite sci fi movies, defiantly of the 60’s possibly in my top sci fi films of all time. It has a beautiful on point atmosphere of a retro American comic come to life and condensed into 1 hour and 20 minutes it keeps a busy pace with minimum fluff.

Dr James Xavier (Miland) is obsessed with taking mankind forwards scientifically, always looking for that miracle breakthrough he invents a new chemical, a drug which makes people see with X-Ray vision, excited about the possibilities and under threat of his funding being taken away he administers the drug to himself with dramatic effects. Through a series of unfortunate events he ends up on the run from the police but continues to develop the drug and probe it’s possibilities. END_OF_DOCUMENT_TOKEN_TO_BE_REPLACED

Films, like many other art forms should influence people, ideally for the better but, sometimes a few of us pick up on the strangest aspects of the oddest movies..

While I’m still forbidden to own an “organ donor machine” I do love motorbikes and stupidly over-powered muscle cars, strangely I’ve never been bothered with owning a vehicle but I’m often found on the back of a bike or helping tuning up a car or two, mechanics seem to run in the family. One day I will buy one and ride it despite both my parents threatening to put me in hospital quicker than any bike accident would.

The love of bikes and fast cars is evident throughout the film, the many “stuntmen” were really just bike enthusiasts and these crazy lost souls really pushed the boundaries of the fast chase scenes, their dedication and love for living on the edge added a touch of the genuine energy in the movie which I’ve never seen in any other film, it’s not something you can buy or install into a cast before filming, you gotta go to the source. END_OF_DOCUMENT_TOKEN_TO_BE_REPLACED

One of my movie weaknesses is vintage sci fi movies, I just adore the heroism and pure wonderment and moral dilemmas they still offer, the 50’s were a golden age for the beginning of big scale science fiction, from mad scientists to space exploration, monsters and space exploration. Things might not really work how they were depicted, the same generation who were sure radioactive insect bites would only enhance a man also encouraged their kids to smoke, but sci fi wouldn’t really be sci fi without a level of taking things too far and being outlandish.

The Neanderthal man is a prime example of a down trodden scientist who pushes the envelope and takes things to the extreme The mockery of a brilliant scientist Prof. Clifford Groves (Shayne) by his peers, pushes him to the dangerous edge of self exploration, after being publicly ridiculed the professor continues his feverish work to prove that our cells remember their prehistoric past and turns himself into a Neanderthal man, his cat into a Sabretooth and his housekeeper into some scary beastly wild woman. The trio have little recollection of their primal actions and terrorise the wildlife and residents of their small town. END_OF_DOCUMENT_TOKEN_TO_BE_REPLACED

When I first saw this movie it literally blew my socks off, I was at the tender age of about 6 or 7 and it didn’t take a lot to impress me, but the idea of a future littered with robots and advanced technology was always something that really sparked something in me. Growing up saw a few inventions, phones beame fun again and not just the colourful see through ones, but more and more technology slowly creeped into my life, and luckily without any of Skynett’s T100, but looking back at Runaway is something I have the urge to do periodically as I still really enjoy the movie despite the dated clunky robots and suspect acting, it still holds some Vaporwave charm, and is still lighting a new generation alive with the hopes of electric dreams.

IT IS THE FUTURE. Machines are being programmed to turn against us. Someone must stop the madman who started it all. END_OF_DOCUMENT_TOKEN_TO_BE_REPLACED

The overall character is like a science fiction bourne movie, the strengths lie in the espionage action thriller but you can’t ignore the countdown timer in the leads arm. But the film has a huge anchor and this drags along in a sea of theology Travis is a man on a mission but it’s plagued with ghosts of the afterlife, as he stands looking into the abyss it’s looking back at him and he’s reminded that he needs to make amends.

Travis Conrad (Hawke) is introduced as a drunk, hanging out with his father-in-law they are fishing and drinking in preparation for spreading some ashes, afterwards the old man, played by the enigmatic Rutger Hauer passes out and Travis heads to the tittybar, grabs a hit and notices some men following him, in a shifty trick he immobilize them and sits down next to the man who sent them, his old friend who offers him a job worth $2 million. Accepting his new job of executing a unknown man he has to find him, and so he starts tracking the family of an operative who’s been hired to protect him. While learning the whereabouts he spares Lin (Qing) but she kills him after plugging him in the chest, but Travis awakens on a hospital bed where’s he’s quizzed about the location, after givin up the news he soon realizes his mistake and that he’s time is up (again) but he breaks free, the doctor explains that he’s got a timer which gives him 24 hours to live again he spares another woman and escapes to get back at his employer by protecting his previous target but to summarize the film in one phrase, Travis is having a particularly bad day. END_OF_DOCUMENT_TOKEN_TO_BE_REPLACED

In a slightly comical prologue a pair of geological researches from an American corporation start investigations on Titan, one sits on an egg like container so his companion can take a photo and a pissed off alien rips him a new one later the geologists ship crashes into a station with the pilot having died in his seat, somes like something from Alien huh.. END_OF_DOCUMENT_TOKEN_TO_BE_REPLACED

Despite the age and the various cuts of this groundbreaking movie it’s still a powerful and disturbing film, it’s one of those titles that a lot of people are aware of but haven’t really watched and I have to admit that I’ve only seen it 3 times and each time it’s been a different cut but the darkness of the story remains constant, Regardless of HG Wells comments about the plot being “silly” it’s hard not to see how it’s a forerunner for those stark dystopian projects such as 1984 (1949), High Rise (1975-2015) and dare I even say Terminator (1984). 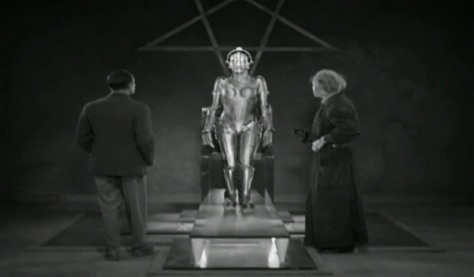 Opening with lavish scenes of an efficient and idealist future cityscape, the Metropolis is busy and filled with beautiful people, one of these stunning hipsters is Freder (Frohlich) his father Joh Fredersen,   is a rich and powerful man who basically owns the city and runs the world above and below from his penthouse office. While Freder is playing with his friends in a pleasure garden, their playtime is interrupted when Maria (Helm) intrudes with a group of children who exist in the underground, who have come to see how the other half live, Freder is bewitched by Maria’s beauty and follows her into the depths of the city, and into a world which he’d been kept apart from all of his privileged life by this rich father who just happened to own the city.. END_OF_DOCUMENT_TOKEN_TO_BE_REPLACED 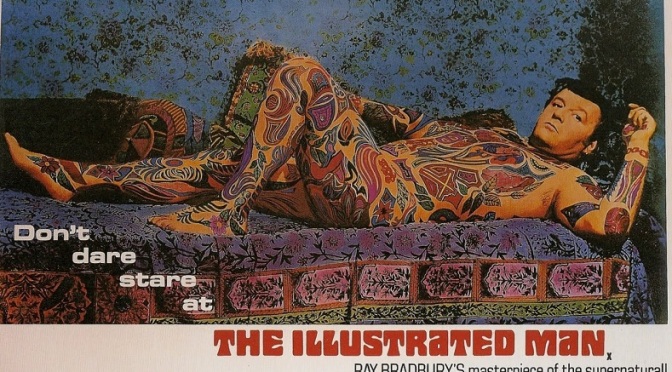 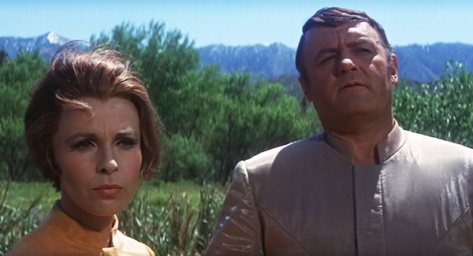 Based on the Illustrated Man by Ray Bradbury (1951)

A bold adaptation of an amazing groundbreaking anthology book from the legendary Ray Bradbury, really this film couldn’t go wrong, especially when you mix Rod Steiger into the mix, the classic actor is enormous in any role he puts his mind and body into and was a dramatic baluster in the many roles he played in this sometimes difficult science fiction movie.

The original book was a collection of  18 Science Fiction Stories, only 3 made it into the film, sadly the least provocative but certainly not the least shocking. The Veldt, The Long Rain and The Last Night of the World, along with some of the wrap around story were all adapted using the same three characters.  For me the movie was very influential, as a child I marveled over the amazing illustrations especially the rose in the palm, the first tattoo, although I chose a slightly different tattoo when I eventually got to that rather sensitive area myself. But even after seeing the demise of a once strong man, the lovely Felicia and her amazing mysteries still enchant audiences today. END_OF_DOCUMENT_TOKEN_TO_BE_REPLACED

This newest visionary delight from Alex Garland, doesn’t fit into the typical science fiction category, with other Netflix releases like Bright (2017) and Cloverfield Paradox (2018), where the effects and story are both weak in the later and jarring this side step into the cerebral is exactly what a lot of dedicated science fiction fans have been craving for so very long now. Taking on a model similar to the legendary Tarkovsky’s Stalker (1979) or Solaris (1971), Annihilation plunges it’s audience into a lavish and dangerous new world to explore along with a scattering of emotive flashbacks added purely for good measure. END_OF_DOCUMENT_TOKEN_TO_BE_REPLACED

The lack of originality in this horror sci fi is quite disturbing, not only the story pretty basic, but it could have lead to some riveting situations, but the set up is like a b movie horror, if there was a trail of blood leading to a room of screams the cast would trip over each other running into sudden death. But there is a blinding moment at the “oh fuck” ending which really hit a personal nerve with me otherwise the film would be a total disaster.

An unnamed interstellar mission uncovers a basic life form in some soil samples from Mars. The probe is recovered by the International Space Station and their 6 member crew manage to revive a cell sample, which quickly evolves into a multi celled organism which American school children name Calvin. I can only imagine it started out as a piece of space Slime Mold (Check out the docu film Creeping Garden for a ton of info)  An accident in the lab causes Calvin to become dormant, so Hugh Derry (Bakare) tries to shock Calvin back to life, this obviously pisses off Calvin who crushes his hands an in his hostile frame of alien mind then roughs up the doctor and starts smashing up the lab. At one point he breaks into a small cage and eat one of the lab rats,  and starts to grow larger. Despite initiating safety protocol, which means isolating the doctor and Calvin, the team still decide to enter the room in order to save the doctor, (DOH!), Calvin then see this is a free lunch. This is probably one of their more imaginative attacks, as he enters the scientist body and eats him from the inside out,  but upon reappearing he is larger, which is a pretty big indication to the fact that Calvin just consumes and grows. So after eating Ryan Reynolds our boy Calvin then decides to go on a murderous rampage  in and around the ship. END_OF_DOCUMENT_TOKEN_TO_BE_REPLACED