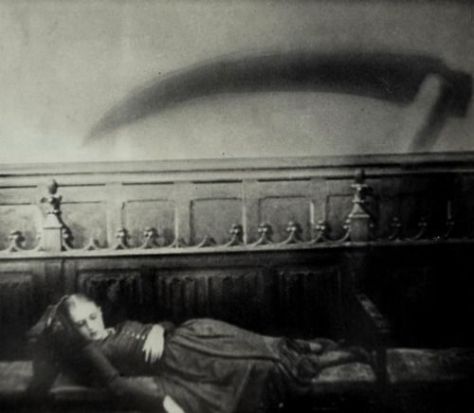 I’ve been meaning to re watch this classic for a number of years, I remember watching it when I was likkle and not really understanding what it was all about and being black and white I don’t think my brain could really process what was going on.

So it was on the to purchase an watch list, and I finally made it there and I feel that I’ve cheated myself. It’s utter perfection, the frivolity of the light and dark shadows, the imaginative camera work and effects, blending in shadows and, mystical dream sequences all depicting the haunting nature of the vampire.  Before the myth was funnelled into Dracula or sexy vampires this falls into the category of folklore and when you go back to our more primal fears surrounding monsters things tend to be more eerie.

Carl Theodor Dreyer entertains a more nightmarish experience and doesn’t focus in on the vampire herself but instead the effects of vampirism. There are a lot of strange occult experiences going on in this film, originally penned by Sheridan La Fanu, who also brought us Camilla and In a Glass Darkly. It’s hard not to connect this with other classics like Das Cabinet des Dr. Caligari (1920)  just due to the spectacular visuals but everything is much softer, almost playful like a fairy-tale but with a very dark story.

Originally written as a gothic novel it has all of toys firmly in the pram and chucks none away, coffins, skeletons, bats, ghosts, long black dresses, this is really what it was about. To be honest this film doesn’t even need a story it’s just brilliant enough to watch, and if you ever get the chance.. watch it with the soundtrack made by a band called Year of No LIght, there is a version on the tube but buy the album and play the two together.. it will blow your mind.