END_OF_DOCUMENT_TOKEN_TO_BE_REPLACED

Starting out with a gothic feel, in a graveyard a couple of teenage girls Dominique and Ursula, set out to perform a spell but it turns out to be a punk’d style prank. While leaving the site a lightning bolt strikes a grave and a strange book is left in the shadow of a tombstone, each girl picks it up but only one is drawn to Ursula and thus the fight of good and evil ensues and a wonderful friendship is challenged END_OF_DOCUMENT_TOKEN_TO_BE_REPLACED 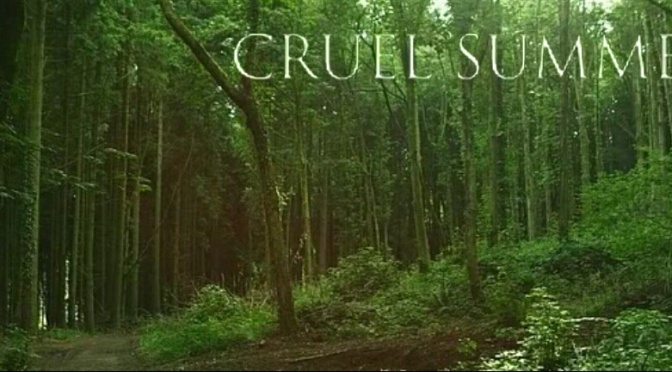 Philip Escott and Craig Newmans movie is an intensely controlled, beautifully raw and a bittersweetly acted account of the systematic hunt and brutal murder of an innocent autistic teen. Richard Pawulski plays a peaceful young man, Danny, who heads into the countryside for some camping, ethical fishing and to enjoy the solitude for this Duke of Edinburgh award, but unknown to him, an enamored Julia (Martins) has lied to a violent and jealous Nicholas (Miller) about Danny having sexual relations with his (now) ex, this lie starts to spread and grows into Danny being a pedophile to encourage another friend to help them track him down and teach him a lesson. END_OF_DOCUMENT_TOKEN_TO_BE_REPLACED

There are so many various types of horror movies some are deeply atmospheric, other rely on fantasy or special effects, some are purely creature features and scare it’s audience by showing graphic monsters that disgust. In more modern times we have a resurgence of found footage, torture gore and this new wave of cerebral horrors that often leave audiences left feeling let down, mostly due to the fact that they didn’t SEE anything. This divides horror fans, it’s much like that of Science Fiction fans who are now heavily reliant on special effects for their kicks as opposed to those who are leaning toward LoFiSciFi.

Now I didn’t do much research into Pywacket and I just assumed it was going to be a big beastie monster in the woods type of horror, but I got a very big shock, it’s more highbrow horror than I ever could have imagined. While it has some minor faults, it could have been done with some refining and maybe a little bit more research into the mechanics but alas it’s still a very well crafted horror that has the ability to really eat into the consciousness and makes you rethink a lot of your personal philosophy. END_OF_DOCUMENT_TOKEN_TO_BE_REPLACED