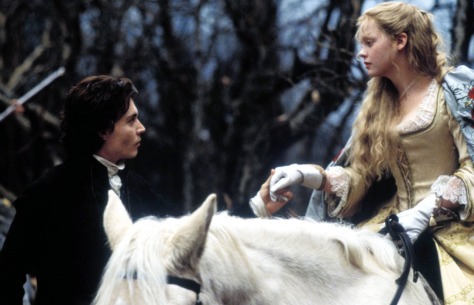 The alluring Johnny Depp returns to the big screen under the gentle hand of his best friend Tim Burton in the timeless epic,  Sleepy Hollow,  Washington Irving’s all  American gothic mystery thriller romance,  and with it’s dark and twisted back story it’s one of the prime suspects of a classic novel that would  inspire Tim Burton to direct again and he manages to give it his stereotypical darkly tinted overhaul, conjuring up massively creepy action scenes for his favourite leading man despite his cheerful disposition and constant fainting, he is strangely the man for the job. Depp plays Ichabod Crane a police officer sent by the New York authorities, in this case by Christopher Lee in the late 18th century to investigate a supernatural crime wave in a small town almost lost within a forest called Sleepy Hollow, one of the obvious twists with this retelling of the story is the modern FBI approach that Crane has towards investigating the series of beheadings like Takeshi Kaneshiro in Dragon (2013) but without the CSI graphics. END_OF_DOCUMENT_TOKEN_TO_BE_REPLACED