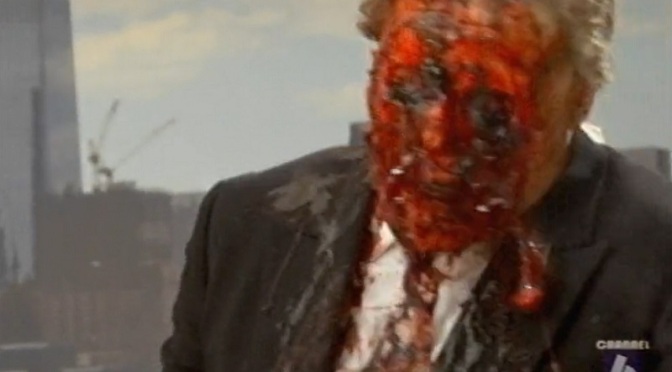 Despite setting records on the Shudder platform, there’s a lot lacking from this instalment of the VHS series, however maybe there was a gap in the market, as this came out during the height of yet another lockdown! leaving it with reviews swaying from weak to the best of the series? Being a total marmite chapter lets me dive deep into it. The wrap-around for this anthology-found footage compilation follows a SWAT team stumbling on a sinister VHS cult and the underground compound, for all of the other wraps it’s one of the strangest as we don’t really see the team settling into the movies like the rest.

Jennifer Reeder (“Holy Hell ”) – This is the wrap-around and is unnerving, cult members with sloppy fingers and gouged out eyes litter the compound as the team notice multiple screens showing movies among the rubble in an abandoned warehouse.

Chloe Okuno (“Storm Drain”) Feeling like a highlight reel of Robocop TV channels, a reporter attempts to uncover the Rat Man, a local cryptid who lives in the cities storm drains but on embarking into the drains, desperate for a real scoop the reporter and cameraman stumble on a cult who worship a lovecraftian monster known as Raatma, whos vomit is used a acidic cleanser of unbelievers. it’s a huge mockery of adverts and Heaven would adore it, totally unnerving and a homage to 90’s gore.

Simon Barrett (“The Empty Wake“) This charming segment is one which a lot of fans will see coming but the tension in waiting for something to happen is pretty chilling. A young woman has to host a wake for a man who’s closed casket service is being held during a terrible storm, she has to film the entire service through the night, swapping tapes and welcoming the family etc, only one man shows and after he leaves things get creepy. She finds the doors chained shut and the power keeps cutting out while the casket begins to move. It’s not a big mystery that at some point the corpse is going to rise but it’s so gory and totally vile it’s worth the wait.

Timo Tjahjanto (“The Subject“) This indonesian chapter is brilliant for old school sci fi horror fans, one step away from all the greats, Robocop, Hardware, Westworld and Saturn 3 all tuned in with some modern gore and Doom styled fighting. A totally drained and brilliant scientist experiments with machine/human hybrids but he gets raided and his machines go on a kick ass fightback with an equally awesome human swat team. Lots of gun, fighting, blood and guts, just the pick me up the film needed after all the waiting in the funeral home in the last chapter.

Ryan Prows (“Terror“) Saving the best for last this chapter relies on the time and tested vampire to feed into a crazy story following an extremist group who plan to use the vampires blood as a method of blowing up a government building! On the night before hatching their vile plan they get very drunk and things go a bit awry. It involved a whole new way of thinking and it makes it so much fun to fall into a seriously strange short, sort of King of the Hill meets ISIS.

VHS was such a groundbreaking anthology, it really set the bar for future movies, and while that goal was always met, this particular movie felt a little rushed, it’s fantasy horror gone wild but it’s not always off the wall as much as the others, still it’s incredibly watchable, at times it does get under the skin and wil unnerve, but personally for me there’s no rush. there’s a lot of talk about a sequel for Shudder, hopefully without Covid restrictions this will raise the bar yet again with V/H/S 85