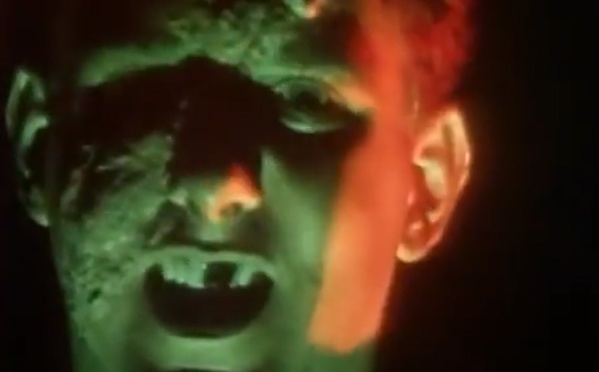 An enchanting tale of a man who collects animal parts for his folk magic, based on the real story of real-life physician John Harries (1785 – 1839) and directed by Zoë Dobson. There’s a masterful eye which captures the more atmospheric scenes turning this creepy horror into terrifying dark fantasy with a lot of body horror be it more of the snail variety it’s no less scary.

Blending ideas about farm life being more than just raising animals for slaughter and living more closely with the land vs the greed driven world of the city. Our silent smelly Cunning man has recently lost his beloved dog and a few animals, while those who shun him in the town just want the authorities to “deal with him” but somewhere in a locked book and magic circle there’s a greater gift than any of those city types would care to dream about.

Happy Birthday to me

If you’ve ever been a total billy no mates then the intro to this sad horror story might ring true for you too. A lonely woman sits at home with a birthday cake, feeling abandoned or maybe experiences a lock down birthday pour un, she decides to be a bit whimsical and draws faces on some paper and gets her furniture to join in with the celebration. Her new handmade friends gather around but she’s a bit shocked to find one eating cake. Ending the fun she soon retires to bed but this is only the beginning of a beautiful friendship. AJ Lodge & Amanda Sharpe have a wicked sense of humor that flourish in this cheeky and very sinister short film. I guess as children we put a lot of emphasis on imaginary friends but to think if those friends really did come to life, it wouldn’t be all toy stories! YIKES.

Back to my favourite subject, Werewolves!! Kristofer Witt has made a few more changes to a movie he originally released in 2014, and who knows he might make some more.. movies that is. His eye for detail and stunning ability to craft an interesting story around a difficult subject is paramount for this short to work. It’s hard enough for a single mother but imagine if you’re a creature of the night as well. No one ever thinks about your needs, no matter how dark and primal they might be. Social issues aside there’s a lot to digest in this demanding film about a mothers love for her daughter and a father figure who might/might not be doing the right thing.

It’s really interesting to see a found footage short movie, as they can be the easiest/cheapest film to make. I’m amazed there haven’t been more. This story follows a young girl who’s been experiencing some strange sleeping patterns and nightly hauntings. Apparently Azron Shai has based this story on true events, not sure where he got the info for or why makes a false claim but there’s little information backing this up. Either way a lot of the mechanics just dont work. The girl complains about being cold but sleeps on top of her covers, this is just so the special effect works but surely you’ll have the actress complain that it’s too hot?

It’s a really good effort, the acting is actually better than a lot of other shorts and the effects work, but the poor set up just leads to a dull nonsensical film

A mini tropical island thriller by Stefan Ruiz. A young man is washed up on the beach of a deserted island, or at least he thinks he’s alone. What starts out as struggle for survival soon turns into a struggle to survive against the local cannibal monster tribe.

It has a small poignant message, the man refuses to club to death the first animal he finds for food but the same grace isn’t given to him as he is stalked by unknown persons. It’s like a mini version of Sweetheart meets Cannibal Holocuast.

Emblane Films made this creepy thriller during the Lockdown and it has its moments. A young woman books into her Airbnb the homeowner will return at midnight but she’s to make herself at home and intends to enjoy her stay but as night falls everything that could go wrong does, including strange shuffling noises in the dark, unknown power outages, a stalker and of course the mysterious homeowner returns but is he a rescuer or tormentor?

It’s slow at first, but once it finds a pace it keeps the scares coming, changing the game and upping the tension along the way. The active camera seems to be intended to make the film a little creepy, as if the audience is the stalker following the young tourist but at times it just feels a bit too shaky cam but does give a sense of claustrophobia and that can only add to a topsy turvy story like this.

Micro short horror from Dylan Clark and while it’s simplistic this is actually really fun. It’s one of those stories you can play with for hours as a director and I’d like to have seen some more to be fair as it’s just fun and also horrifically horrifying.

A young girl starts to photoshop herself but the effects start to happen in the real world but is she the only person working her laptop? A charming horror with a really sinister deviant entity working the controls.. and a spooky monster too! I will definitely be checking out more of Dylans films in the future as his The Pretty Thing had its moments too, check out the last review and video here.and…

The Making of Transfigure

I love it when a filmmaker goes behind the scenes and I’m so impressed with the hard work that went into this but it pays off.

While I was disappointed that this is another short called Monster, I was really excited to see that Nina C Meschini did something new with the story of a little boy who believes there’s a monster in his room. His parents bicker but are they holding back the truth from the youngster?

There’s a lot to think about in this dark ceiling movie, although at times it’s so damn dark you can’t really see what’s going on, but that’s a minor setback for the wonderful reveal at the end. definitely the way to make a creepy short movie without the need for tons of special effects, just a charming story and great acting.

Aby Joseph’s curious little film will help school the youngsters on what Eldritch really means.. (for those who don’t know .. weird and sinister or ghostly). AJ is a man called to work a new job, but moving into his temp home he begins to notice strange things, initially someone is fucking up his loaves of bread but when they start on the tortillas then AJ gets serious.

Aby’s attention to detail in this nearly silent film is outstanding, the camera angles and experimental filming techniques really liven up the thriller, flipping the camera around, zoning in on emotion more than shock, Aby really

I Love your guts

Two girlfriends working the nigt shift in a fast food restaurant are dealing with their friendship woes when a drunk patron beings to fuck up their night, while trying to work out if they are in love or not he attacks one of the girls and breaks in to eat.David Janove somehow makes this night time shennanigans funny, even after one of the girls gets stabbed in the ass. There’s a lot to laugh about though, even if it isn’t the zombie/cannibal mix I was expecting from the title. This is what true friendship is all about.

A suggestion from the brilliant Fiend of Film , I was intrigued to watch this great textured animated short highlighting the dark moments of when a man heads out to meet a date but finds something wet in the woods. I can’t get enough of the rich tonal textures and character design. It almost makes you forget what might be lurking out in the woods at night. Definitely disturbing in more ways than one, Stas Sntimov really knows how to literally get under the skin and then he gets to work.

ReignBot casts her magic spell over yet another of the internet’s weird celebrities. This time it’s the story about a woman who married her zombie doll. We’ve all heard the story but no many people bothered to look into the how or why, well you can sit back for a few minutes and experience all the gritty info..

It’s been a while since I checked it in with the channel, but it’s always a pleasure to see that things are still disturbing and creepy within the cave systems of America. Written by T.J Lea the story sees a group of friends hike deep into the caves when they begin to hear a wailing.. but who or what could be trying to gain their attention? If I ever go caving I’m taking a fun flamethrower and priest with me just in case.

Mysterious Video that will scare you good

Where do Slapped Ham find all these videos? this mix has quite a few new videos for me, the opening scene of a guard talking to an invisible person is quite chilling.. drugs or the supernatural? Check out the other videos to see what you think,one of them clearly looks like a hoax to me, but can you spot it?

12 Unsettling Monster of Cabin In The Woods Explained in Detail

This is actually worth a look if you enjoyed the Cabin in the Woods movie, it doesn’t always go beyond what a lot of movie fans have worked out AND it doesn’t explain Kevin but there were a few details that I didn’t pick up on and I’ve watched the film a least 90 times..

I’ve watched and read about the Demon Core but this 15 minute introduction is actually really inspiring, if you’ve not heard about the core this is a pretty good place to start, learn something new..

Hopefully you enjoyed this week’s list, if there are any short movies that you can recommend please let me know.

You can find a list of all my Short Movie Roundup’s here.

My Favourite  Short movies of 2019