I was watching a really odd 1970’s movie as a child and the opening credits went on FOREVER.. I asked my mother why the hell did I have to watch everyone’s name go across the screen and she explained to me that a director had to put the credits up or it would cost a lot of money for them not to have the credits there, I realised later on in life what she meant, after all she was just trying to shut me up.. but she did tell me about something she had read about a director who had to pay off a producer to stop insisting their name was at the forefront of a movie!

Really? is it that important?

Well it’s cheaper and easier to just have the credits so why not make the most of them! I like movie openings to be short, to the point, entertaining and unique.

Here is a list of my favourite opening credit sequences (in no particular order).

This has to be one of my all time favourite movies, from the first time I watched it until the day I die I will be forever in love with this film. In terms of just the opening sequences, the remixed version of Closer, the gritty and jilted cameras, the content of John Does books, references to god, death and sex are amazing. A LOT of films try to re create this look and feel and fail totally, the Saw franchise are a classic example. But Se7en gets it so right.Full details on art of the title.

When I first watched the movie the opening sequence totally passed me by, I really didn’t get it, it wasn’t until I made it to the end and you hear that iconic song (Wir setzen uns mit tränen nieder” from the “Matthaus Passion” by Johann Sebastion Bach) that i took in the full grandiosity of the opening sequences, poor ole Robert De Niro flying through the sky though the background of casino lights. It’s rather relaxing, for the viewer. It displays who the movie is centered around and the crazy glamour of the casino and how it will affect that one man quite simply in one scene.

I had a bit of an idea about how this movie was going to be but the opening skyline shots really did unsettle me… quite a lot, it was a simple technique, just turn everything upside down, which is what the movie attempts to do. I think John Dowdle really wanted to try and turn at least your perception of the world upside down for the duration of the movie. But does it also represent the devils decent into our world to find his victims? Then the credits end with a magnificent suicide!

I’m adding this one in for my sisters benefit! I do adore it too.. but the little critter reminded me of it. The movie opens with the various gangs of New York all congregating to a central meeting point and our home team of the Warriors planning their strategy. Your not only introduced to the characters you’ll be caring about throughout the movie but all of their attackers too, and what awesome colourful characters they area.Full details on Art of the Title

The camera races across the north England landscape and what’s that coming of the hill, is it a large golden name.. YES it is. The credits for this movie are hovering over and are within the frozen landscape that Michael Fassbender is running around partially naked in during the first few scenes. I personally think it’s clever. it displays that the characters are foreign and lost/hidden in the land.

I know I know i keep going on about how I dislike remakes so much then I mention how I admire this one!? I do like a few of them, and I think this did well, there was a 30 year gap which i think is just about acceptable for a remake and the story wasn’t disgraced in anyway, the effects weren’t over the top, all of the death scenes were similar but enhanced in a more modern way. It is a good film, but I’ll go into that in more detail. For now I’ll say that I really liked the opening scene, there are monks running around trying to find reference to the star that’s appeared, images of our world being destroyed as predicted in the christian bible and throughout there are numbers changing into 6’s and T’s into crosses, it initiates the viewer to start reading between the lines and looking for signs.

This delightful debut hit our screen with some great shots and some swagga to George Baker Selection’s 1970 hit “Little Green Bag”. Since this movie i can’t hear that song with out reminiscing over the colourful characters (there’s a joke there if you read between the lines.. ahem). Then the scene fades out to more K-Billy’s Super Sounds of the Seventies Weekend just keeps on truckin’  Who didn’t want to be one of those hip guys in black? More details on Art of the Title 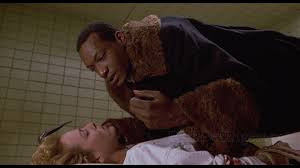 For me this was the first movie where I saw the city from a birds eye view, I have seen this technique used in TV shows and other programs in such a way so I’ve always assumed that it was done in this film first!? (if you know more please let me know). But as much as it was different (for me) it seemed to symbolise something similar to Devil where the Candyman was being called to come to the city to sort out his business, and is just passing over to find the right spot.

This movie is just full of scenes that will be copied by other directors for years to come. It’s a full on gritty on the streets crime drama? and I love the entire trilogy, but getting back to the opening.. I like that the main characters are introduced in a back street alley kind of way,  the faces are obscured and a name flashed above their head they move forwards you get an idea of who they might be then back into darkness. Everyone goes by a first name or nickname there are no life histories on how they got here, it’s very  much in your face.

My mother introduced me to this movie, I borrowed it from her, popped it in the player and wasn’t shocked to see the the uber violent toilet scene but what did capture my imagination was the blood spelling the names, does it suggest that this movie and characters are bathed in blood!? The Pang brothers always wow an audience with great effects and flashy bits like this and while it’s not ground breaking it’s mesmerizing to watch. 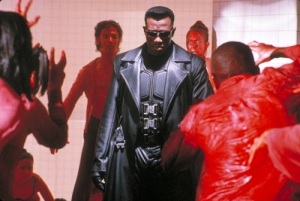 When i first watched this movie this was my favourite scene! It certainly made the movie for me, bringing vamps into the club scene which it detailed on later in the movies. It was a marvelous start to any movie and really did a lot for Public Domain.. at least for one song!

It had taken me a while to watch this film (getting hold of a copy in the early days was hard). The film starts in an odd ball fast moving assassination/voyeur kinda of way.. Ichi is on a mission and is stopping by to watch his favourite prossie get her face beaten in. For ages I thought Ichi was the guy on the cover, but you soon realised it’s a mild mannered waiter who produces a lotta sperm and leaves it in the flower pot outside the prostitute window, strange, yes it is, but it also momentarily embosses his name! sexy!

A stark and simple title scene for a movie, the block letters that spell out the word Alien. It’s probably a good idea that they didn’t stick with the title of Star Beast otherwise it would have gone on too long. It does have it’s similarities to the Thing (1982) but only slightly.

Setting the scene for what is to come, Sin City opens with beautiful, monochrome murder, sleek dresses, smoking revolver and the heights of the city. It’s a memorable opening… Full and in depth analysis here. 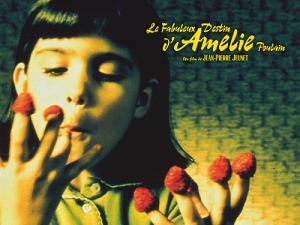 Iwas mesmerised when i first watched this sequence of childhood memories, I think at some point I had played with all of the times shown. It is a great line up to the movie as Amelie keeps her sentimental childlike and innocent outlook on the world throughout the movie. It is just simply charming.

I’m such a bloody goth.. I love the dark and foreboding feel to the beginning of this movie, the monastery, thunder, lightening, the number 13, monks, crazy bloody crucifix etc it’s just brilliant! I got part 2 first and wanted to wait for number one before i watched the second but the two movies are pretty interdependent so i stuck 2 in the DVD and after that opening I just had to watch it and I thoroughly enjoyed it.