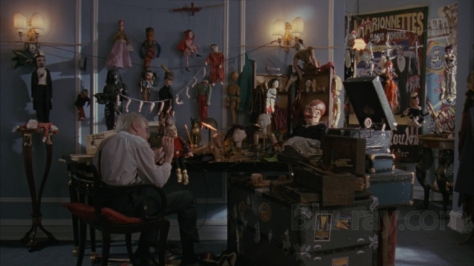 Despite being one of the more memorable cult horror from the late 80’s I don’t feel the the Puppetmaster gets the recognition that it deserves, this is probably the fault of the 9 sequels that slowly parodies and destroys the original magic of the deadly dolls.

For me there is a nostalgia associated with these demented puppets, not only were they in the scary section of the video store that was off limits, and therefore it was a item of great curiosity for me, and even though I had watched a great number of horrors as child (i know.. look how I turned out) I still didn’t see this for the first time until I was in my teens but I fell head over heals with the atmosphere and bizarre characters. I remember the cover looking evil and demented but the film is more of a dark fantasy story more than a horror, but thinking about it logically.. how terrifying can a puppet be?

Killers come in all sizes

Back in the 80’s there was still an ounce of oddball storytelling left in the horror genre, the lavish landscape of this dark fantasy story starts with a lonely old man named Andre Toulon (William Hickey) restoring and adding finishing touches on a living jester puppet ( astonishingly named Jester). Outside the hotel two nazi spies get out of car and head towards Toulons room but they are beaten by a small doll, Blade. Toulon lovingly puts all of his toys away in a suitcase and hides them in the wall and shoots himself as the agents barge into the room… 50 years later it’s 1989 and a group of psychics are all drawn to the hotel and find their one of their beloved friends has passed away, something that their spidey sense hadn’t picked up. While waiting for the funeral proceedings in the creepy out of use hotel, the group of psychics relax and investigate the unusual setting. Until a group of tiny assassins start dispatching them out one by one.
I think one of the principle errors is thinking of this as as pure horror, it is a dark fantasy story, with charming music box style tinkling while murderous dolls prowl around, killing with their own unique weapon and personalities. And if it wasn’t for the gore the it would be a magical fairy story.

Just a little bit of sauce and Dana can become quite the cynic – I am not a cynic Frank! I like to think of myself as a nasty bitch.

The dolls are brilliant but I’ll start with their wacky victims.  The group of psychics are similar to the assholes from Witchtrap (1989) but they are more psycho sexual, mostly Dana Hadley (Irene Miracle) who is psycho and walks around talking with her taxidermy dog while  Neil (Skaggs) and Megan (Frates) who are tres raunchy, and it’s during one of their kinky sessions that they encounter a couple of vengeful dolls and the corpse of their long lost friend that keeps popping up in strange places.

David Schmoeller managed to create a terrific atmosphere, the music box tinkling really ensuites the tiny assassins as they creep around killing the hotel guests, there are some great if not accurate shots from the dolls perspective but sadly they aren’t given enough screen time which is terrible, especially as we saw nothing from Shredder Khan and he looked awesome, but in credit, they were created with some very detailed stop motion techniques.

Overall the film is generally quite campy by today’s standards but it’s easy to see why it’s often tagged as a cult classic as the ides of killer dolls is as old as the hills but it hadn’t really been explored in this way until Puppetmaster. The film isn’t really all that terrifying,  but it’s certainly creepy, who would ever believe that dolls are coming alive and how do you ever prepare yourself for this deadly attack? Some of the deaths are comical but any horror enthusiast will be overjoyed at the gruesome (over)kills.