A long running all time favourite of mine that displays one of the more memorable transformation scenes in Werewolf Cinema, Howling was certainly a pleasant horror to fall for especially in a year that also saw the amazing cult classic, American Werewolf in London (1981) the stakes were high and this terror filled movie manages to conjure up a less messy but equally thrilling horror transformation in a unique tale. 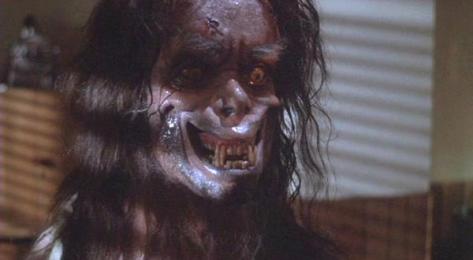 This groundbreaking horror with a slice of black comedy works on many levels, but strangely stays away from the gore but remains one of the best in it’s field, this is mostly down to the great characters and compelling storytelling.

Following the timid Karen White (Dee Wallace), a LA anchor who is acting as live bait to capture Eddie (Robert Picardo) a psychotic stalker who has trying to coax her into his dark world. Wired by her TV station and being monitored by the police, the skittish Karen goes to a seedy sex shop where Eddie is waiting for her but the ordeal leaves Eddie dead and Karen left so traumatized that she and her husband Bill (Stone) are whisked away to “The Retreat” to relax and attend therapy sessions from the world famous Dr. George Waggner (Patrick Macnee). Upon arriving the other residents appear with toothy smiles apart from a couple of misfits who live on the fringe, Marsha (Brooks) and her feral brother TC (McLeod). While the couple settle into the quiet country life, back in the city two of their newshound friends are carrying on the investigation into Eddie and after his body vanishes from the morgue they end up following his trail to the same retreat.

I honestly can’t imagine where werewolf cinema would be without the Howling, for me it’s one of the best (if not highly cheesy) horror franchises, and the transformation scene is second only to American Werewolf for it’s time, and to be honest it outdoes a lot of the cheap CGI muddled transformations of modern films..

While being recognised as a horror, with a dash of bizarre comedy, mostly Walter (Dick Miller) who instead of being terrorised by Gremlins he’s actually an occult bookshop owner, but the show is stolen by Robert Picardo and his epic transformation, with the pulsing skin and animatronics it’s equally putrid and hypnotizing.
Overall this is a horror movie that mixes things up, but with great direction and inspired special effects it managed to achieve an eerie atmosphere that attacks throughout. The cast list runs like a who’s who of 80’s horror and all respected in their own rites and it’s certainly a film that deserves a place in the horror hall of fame.