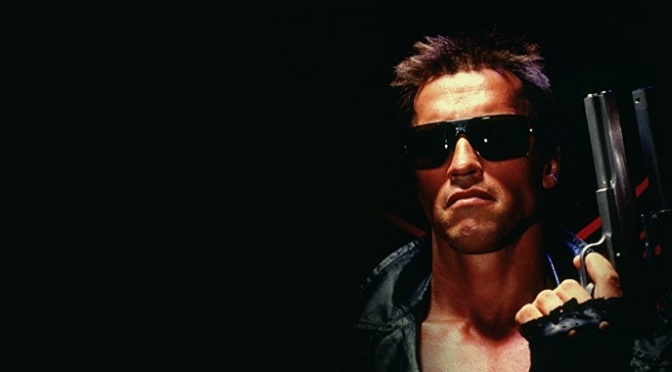 Terminator is definitely one of my all time favourite sci fi movies, and the only decent film form the franchise in my honest opinion. While the movie is limited with its mechanical effects apart from the metallic ending there is the iconic repair scene in which the Terminator T-800 machine acted by Arnold Schwarzenegger repairs some of the damage to the fleshy bits around it’s mechanical skeletal frame.

It’s clear to see where the special effects takes over from Arnold but it’s still such a brilliant scene, not only do you get to see the inside of the machine but it’s one of those moments when an audience can really appreciate how technical and marvelous this mindless killing machine really is.

But mindless might be the wrong term here as the human qualities of the T-800 are really observed. Fair enough you see him purchasing the guns and killing the owner in the store but after he pops out his eye and dons his shades he fixes his hair.. What a vain motherfucker.. But it’s these little qualities which makes the machine so hard to spot. But underneath that chiseled physique there is a chrome red eye futuristic demon. Analysis can be made and similarities made to anyone with a dark nature having two faces and the ugliness of what lies beneath us all.

Not the most action packed scene but one which is so well crafted (for it’s time) and one that isn’t easy to forget.