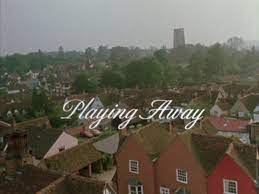 The beautiful game of cricket is the focus of a witty tale that highlights the ridiculous nature of racism and plesantary of just getting along and being a good person or at least a sports person. Somewhere in Ove’s little hidden gem of a movie, there’s a nod to the empowerment of being a team player, noting how the games give the population a sense of becoming a better person.

Luckily you don’t have to pretend to understand how cricket works to get into the dynamic of the teams or the film in general, When the Conquistadors, a Brixton based group made out a majority of Jamanicans, take on a the sleepy town of Snetterton, the calamity begins before the board their bus in London, when the captain attempts to get them together for a group photos it’s plain to see no one is really in charge.

Coming at the height of racial riots throughout larger cities and the capital, this is one of many attempts from the 80’s to dissect cross culturalism, originally given a 15 rating on it’s first release, probably due to a few F words, and a touch of N.. that are never really properly formed, but the intentions are clearly there, but in all it’s less racy than an episode of Midomer Murders.

I’ll have you ejected!!

What the bloody hell do you think I am? A Rocket?

Tensions among the men quickly turns ugly as the pitch bravado to spark off a mildish slew of racism, but bubbling on the surface the best characters start to bond and really makes the event memorable despite the nasties, most notable Ross Kemp and Neil Morrissey, who manage to excuse themselves to let the adults play in the end, and wouldn’t that be nice if everyone else who is a racist loser did the same?

It was very important in the late 80’s to try and assertively tackle race relations, with Brixton riots and regular far right uprisings causing a social ruckus, it was through sports and film that the biggest advances were attempted, so why not combine the two and make a film about the most peaceful racially diverse sport? The film covers a lot of territory, the subtle curiosities, the rage and somewhere, the innate similarities.

Ove’s talent alongside all of the blistering acting talent makes for a wonderful drama that sometimes spills into a few moments of genuine horror, but the creativity of the cast, who have all experienced racial interactions and have expressed a love for cricket, are possibly playing out their demons? Despite all the tension, drunken moments and a strange pregnancy proposal, the sporting event remains the climax of the movie, it’s never about one team or the other, Ove uses cricket to reflect the complex struggles, failures and successes of all humans..