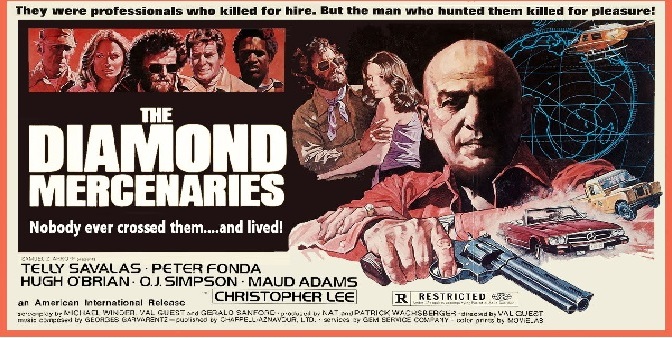 Basically this is just five guys out to complete a diamond heist, but the in depth plot is a bit more tit for tat, the head of security, Harry Webb (Savalas) believes there is going to be a robbery in one of the diamond mines out in the desert and soon becomes unpopular with everyone including a cover girl model who happens to be the daughter of his boss and owner of the mine who is love with one of his team, Mike Bradley (Fonda). Nelson, the mind administrator, gives Bradley the task of stealing a diamond not only to test him but to get him involved with a group who are planning a major heist.

This film is just long and boring, it attempts to come across as a classy bond movie, the whole premise of a diamond mine being robbed by a select highly acute individuals is brilliant, especially when they are robbing Kojac but the presentation from Fonda is appalling at every stage. He tries to be a laid back cool guy but just comes across as a manchild, at times Lee appears and gives the movie a few moments of potential but they are often swept away by OJ Simpson’s agonising and clunk presence.

The lack of direction and director talent doesn’t help, at times it feels like some scenes were unattended by the director and the camera was just set up and left rolling. On the plus side if you to kill 2 hours watching a 30 minute story then this will help you along. At times the silliness could be seen as comical, but overall the impression is that this movie is underpowered and just lacking in everything, I could barely make it to the end.